Never underestimate the noise that a roomful of kids can make when they’re excited. And, don’t for a second think that science doesn’t make kids excited. And loud. And wiggly.

If you were anywhere near The Frontier at RTP on April 23 while US2020’s STEM Expo 2016 was underway, you know it’s true: You heard kids shrieking with excitement as they steered a robot to shoot a basket and shouting out answers to questions about everything from why this slime is magnetic to how to why that corn resists drought. You saw kids wriggling around a virtual world as they tested Oculus goggles and jostling around crowds to catch a Frisbee. And you felt the excitement as kids realized that science can be fun. 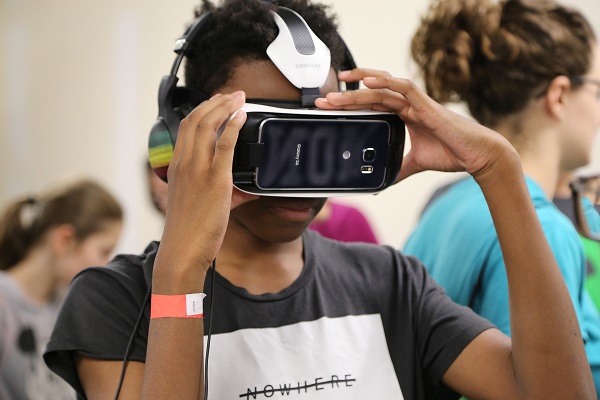 STEM Expo 2016, presented by US2020 RTP, brought together nearly 30 corporate presenters and 650 kids from 16 North Carolina counties for a day of activities designed to expose kids to a range of science, technology, engineering, and math career paths. With more than 30 science experiments and demos, accompanied by a food truck rodeo, a hands-on Citizen Science activity led by the North Carolina Museum of Natural Sciences, and prize giveaways, the Expo not only successfully made a convincing case for why kids should love science, but it also convinced all the adults in attendance that noise is a good indicator of learning.

“I mean look at them,” shouted M.J. Rosensweet, the IT director at Central Park School in Durham, over the noise of his students cheering themselves on while perfecting their technique with pipettes, or droppers, for lab work. “They’re so excited. It’s just a great way to give them some ideas about what’s out there and what they could be doing. We want to build an environment at our school that shows kids what’s available and what’s possible.” 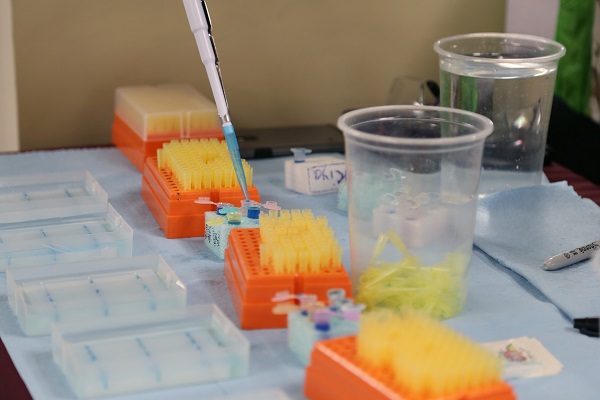 That’s the point of the STEM Expo: to highlight the fun and the huge range of career possibilities in science that kids might not get exposed to during day-to-day classroom work.

“The Expo is our best way to expose students to STEM by having them experience it,” said Brett Brenton, program director for US2020 RTP, whose mission is to expand STEM learning opportunities for North Carolina kids. “This event is a chance to spark interest in a variety of STEM fields in a very short period of time.”

Brenton, who recruited dozens of local companies to participate with demonstrations and exhibits about the science behind their work, said the event is also a unique opportunity for businesses to help kids understand the work — and the value of the work — that they do.

“These kids have heard of Fidelity and GlaxoSmithKline, they know these companies donate to schools, but they don’t know what people do there,” Brenton says. “What is coding? What does biological research mean? This is a roll-up-your-sleeves way to show kids a career path, to connect the science they’re learning to real life. You can really explain who you are, and why it’s cool to be a part of it.”

At the BASF table, kids took an impromptu quiz about corn. 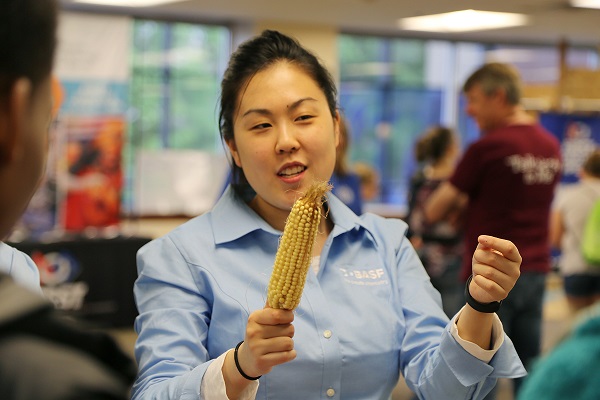 “OK, guys, how many of you eat corn?” asks Me-Rae Kim, a sales rep at BASF. After a chorus of “I dos!”, she asks a harder question: “Do any of you know how much of the corn we produce in this country is actually eaten by people?”

“Nope. One percent. Yeah, crazy, right? We eat one percent of the corn we grow. Do you know where the rest goes?”

“Yes! And lots of places you wouldn’t think of, like paper, gasoline, even fireworks. Really, I think our country would come to a stop if we couldn’t grow corn. So my company is trying to make corn that grows better and stronger to make sure we can always grow it.”

As the kids sift through buckets of different types of corn, the BASF team gives a mini-lesson on how science has changed the way we grow food.

“This is a great chance to educate kids about plant science,” Kim says later. “I also get to talk about how they can get into science careers even if they don’t like science. I’m in sales, not research. There are a lot of ways you can be part of this industry and the innovation that’s happening that aren’t in a lab.”

In another room, kids got to be part of the industry for a few moments, as they reviewed images shot by wildlife ‘camera traps’ in local volunteers’ yards to help identify wildlife and shed light on migration and feeding patterns. The project was sponsored and staffed by the North Carolina Museum of Natural Sciences. “That’s a deer,” says one student, flipping from one image to the next at a laptop station. “No, that’s a dog!” insists another.

“Animals get scared when they see humans,” explains Danny, a seventh grader at Wakefield Middle School. “So we have to use these cameras to get pictures.”

And why do we need pictures of wildlife?

“So we can find endangered species,” explains Sife, Danny’s classmate. “We can learn how much of them are out there around the city and what we can do to help them.”

In another room, the FIRST robotics team FRC-5190 from Green Hope High School in Cary is showing off its robot, built to overcome a series of obstacles in order to get to a large tower where it can shoot a ball into the tower’s top. It’s part of the FIRST Robotics Competition, to which the team is heading soon. 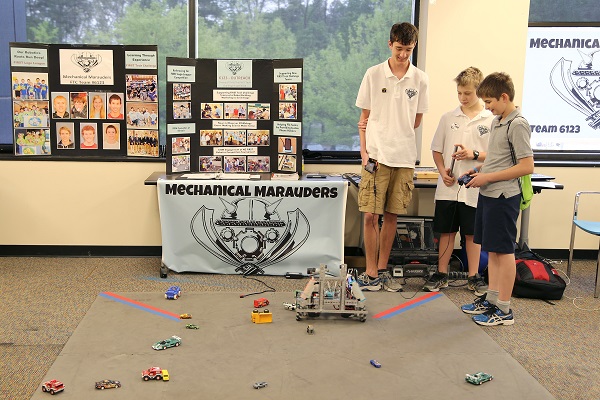 “This sort of thing teaches kids what they can do at a young age to get involved in science,” says Jordan Sayman, a member of the robotics team. “I wish I’d started in elementary school. I didn’t know anything about robotics until last year when a friend approached me and said ‘We’re looking for more girls to join our team. If you join you’ll be the first.’ I said that sounds great. And I’ve loved it.”

Sayman’s team also shows off a device they created to assist people in making it easier and faster to attach and remove prosthetic limbs.

“The example we had was a young, small woman with a prosthetic leg,” says Sayman. “She had a prosthesis for running, one for wearing high heels, one that had a fake foot. Each was hundreds of thousands of dollars, and it took a long time to switch them out. We made this coupler to make it easier.” As she talks, she shows off the 3-D printed contraption that allows faster attachments of limbs as well as the award the team won in the Veteran’s Administration Innovation Creation Series. [Side note: The team is currently looking for mentors and new space to work in, so if there’s an empty space in your building let them know!]

It’s the sort of stuff that could inspire anyone — science that makes a real difference in improving lives. For the kids who got to attend STEM Expo 2016, seeing that kids can do it — and better yet, getting a chance to do it themselves — opens a new world of possibilities. “They probably won’t remember all the people they meet today,” Brenton says of the kids bustling in and out of The Frontier. “but they’ll encounter one of these exhibits and it will resonate. They’ll remember that.”

Expo may be over for 2016, but the STEM learning continues. US2020 is always looking for corporate partners and mentors to help introduce kids to STEM. Contact Brett Brenton to get involved.